Headed to the Mohegan Sun Casino in CT last week for a mini get away.  We originally thought we would get some steak but at the last minute decided to quell a continuing craving I've had for Mexican food.  SolToro Tequila Grill fit the bill.  We sat in the bar area so we could people watch while eating.  We ended up more interested in devouring the food than anything else.

Since this was our first visit, our friendly and knowledgeable waiter Chris gave us an overview of the menu and told us about the table side guacamole since I was definitely going to order that.   First off, I had the SolToro signature margarita, very fresh and tasty, to go with the freshly made guacamole.  We watched as the woman deftly separated and scooped out the beautiful ripe avocado flesh into a bowl, mashed it up and added a garlic, onion, lime, chili, lime and cilantro to make one of the best guac's I've ever eaten.  Chris had asked us if we wanted an order for two or four and although we chose the one for two we loved it so much the next time we'll get the serving for four.  It's really awesome and you don't get any fresher than made at your table!

The other appetizer we ordered was the Shrimp Ceviche.  Fresh lively limed shrimp served in a martini glass was tangy and so fresh tasting.  We loved the tortilla chips as well.  Nice and light and crispy.

Trying to maintain some semblance of a Paleo diet, I chose the Mixed Grill.  Beautiful presentation on the plate with a piece of cilantro-marinated filet mignon, adobo chicken, and pork tenderloin.  You can see in the photo the sauces that were added to the plate to make the nice presentation.  Not knowing exactly what they were but one tasted like a black bean mixture, I tried to stay away from it as pretty as it was... On a Paleo diet, legumes are a no-no.  The mixed grill did come with rice and beans though.  I had a taste of the rice which was ok.

The other dinner was the Grilled Shrimp taco. You get a choice of three different tacos if you would like.  It's also serviced with rice and beans.  The shrimp was firm and fresh and topped with chayote slaw and salsa.  I didn't hear too much from my husband because he was too busy enjoying it. 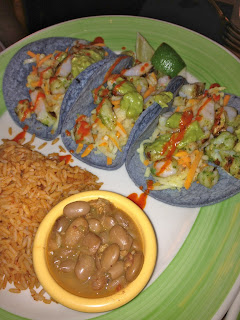 Overall we had an excellent meal with plenty of good, fresh, hearty Mexican food.  We'll be back for more!