Mystic, CT Getaway at the Seaport and Red 360

On a recent Sunday we decided to take a trip to Mystic Seaport to view the exhibition of the legendary British painter, J.M.W. Turner, being held at the Museum. The exhibit is in partnership with Tate, London and is being held from October 5, 2019 through February 23, 2020.

Since I have recently picked up a paintbrush and started painting with watercolor I was specifically interested in seeing Turner’s watercolor paintings.  This exhibit holds a fabulous selection of over 90 of his works.  The exhibit is well organized with great explanations of each work.  It was a busy day at the exhibit and I was really inspired by his work and picked up some tips on how to improve my own work.  There were plenty of books for sale at the Museum about Turner as well.  I am now the owner of his book titled “How to Paint Like Turner.”  If I could only be so lucky to paint even one stroke like his work I’ll be happy!

Once we finished the Turner exhibit, we headed out to explore a little more of the Seaport.  One particular room was fascinating, The Wendell Building, that houses figureheads that are mounted on the wall in the building.  It was interesting to see the various sizes, colors and skill exhibited on the figureheads and ships’ carvings from craftsmen centuries ago. 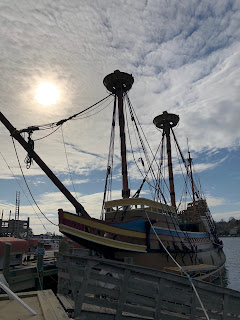 We also took a quick look at the Mayflower II while we were there.  Someone pointed out to us that we’d be surprised by the size of the ship and indeed we were.   There it was in all its glory, and yes we were surprised at how small it was!  Visitor’s to Mystic Seaport are really going to be in for a treat to see the Mayflower II in 2020 for the commemoration of its 400th year celebration of the Pilgrims' landing at Plymouth Rock.

Once we finished walking around the Seaport we set off to get lunch at a restaurant recommended by friends that are frequent visitors to Mystic during the summer.  There were a few places to choose from and we decided on Red 360 because it had Sunday Brunch items, a good "winetail" list and it had waterfront views of the Mystic River and boats in the marina.

Red 360 is a bar and restaurant located in downtown Mystic on the Mystic River.   You get there by going through to the back of a marina.  It is a good-sized restaurant and was very busy for a Fall Sunday.  As it was the last day of Restaurant Week it had a rather busy crowd.  We managed to get a seat at the inner bar and had a beautiful view of the boats and the water.  The restaurant was very lively to say the least with the bartender running back and forth making drinks and serving meals.  After some time we ordered drinks from the menu, one was a Cuban drink with rum and mint and prosecco, and the other was a Blood Orange Spritz with  rosemary infused Aperol and Blood Orange and Gloria Ferrer.  Although very good, I did not taste any rosemary flavor.

Brunch is one of my favorite meals and I was looking forward to something different and yummy.  As I looked around I didn’t see anyone close by eating yet.  The restaurant week menu looked good and eventually my husband chose the Grilled Chicken Flatbread with basil pesto, arugula, baby tomatoes and shaved parmesan.  There was a lobster omelet on the menu that also looked pretty good but I ordered a hot buttered lobster roll instead.  I’m a huge CT lobster roll fan so I wanted to see if this would be worth a return visit to Mystic in the summer.  Both meals did not disappoint.  The lobster was fresh and loaded with salty butter.  It was a good size and the fries with it also very good.  The flatbread was on the small side but that was due to it being from the restaurant week menu rather than the regular menu.  It also included a dessert that was a small ramekin sized crème brulee.  Unfortunately, we did not end up eating that as we had to leave since we had been there longer than expected.  We would probably return because of the great waterfront view and to try some other menu items.  Hopefully next time there will be more servers so it won’t seem so chaotic. 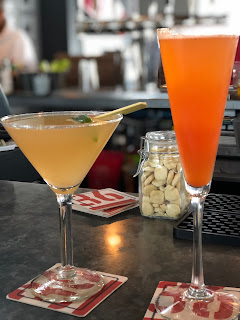 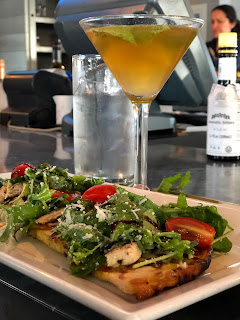 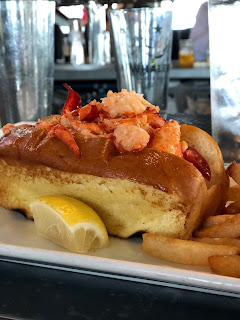